No Limits!: Time Travel through Science of Mind Magazine June 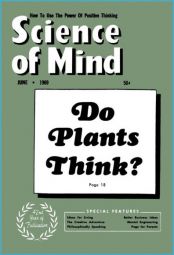 No limit can be placed upon the spirit of man.  It merges with the Universal Spirit for the two are really One. God is in us and we are in God. – Science of Mind, textbook, page 87

Wow, wanna fun exercise? Pick a moment in history; or maybe choose an anniversary or birthday.  Now pour through the archived files of Science of Mind magazines.  Find the Daily Guide for that particular day.  Next, open yourself to the revelations of Spirit.  Look for how that day’s reading might tie into your chosen event.  And remember, the guides are written months in advance.  There’s very little chance the writer was consciously aware of what was to unfold on each day of their assigned writing.

I was in awe of the entry for the date I chose.  Does June 21, 1969 mean anything to you?  If not, when I tell you you’ll likely remember the event and exactly where you were. If you were on the planet that day, you were probably in the same place as millions of other Americans – as millions from around the world.  Does this help? “That’s one small step for [a] man, one giant leap for mankind.”  Yep, June 21, 1969 – the day Astronaut Neil Armstrong stepped from the lunar landing module “Eagle” onto the surface of the moon.  Were you in front of a television set?  Were you watching Walter Cronkite narrate the scene?  Do you have those God-bumps again as you remember the moment? (Pause briefly, take it all in – again.)

Let’s go back to the magazine.  The reading that day feels almost prophetic, beginning with the selected textbook passage from page 87 (see top of page).  Traveling to the moon certainly was an expression of man exceeding perceived limits.  The first line feels equally appropriate to the lunar touchdown, “In the contemplation of the Spirit, we sense we are caught up in a vastness and an infinitude that staggers the imagination.”  Certainly the scene both staggered and caught Armstrong’s imagination. He described the lunar landscape as “magnificent desolation.”  Sounds like vast infinitude to me.  Imagine being Armstrong, looking up from the moon’s surface at the endlessness of space, planets, stars, and galaxies stretched out before him.  Imagine my grandfather sitting beside me with tears in his eyes. He said, “Stevie, I walked to school, drove a horse drawn carriage to college, came home driving a car and have flown coast to coast non-stop in an airplane.  And now, here I am watching a man walk on the moon.  I cannot even imagine the world awaiting you.”

And here we are, living in that world. I’m typing this blog entry on an iPad.  I’ll upload it to the archive website from my local coffee shop – almost like magic.  Yes, it is an incredible world in which we live.  Still there is work to be done. Limits in consciousness to break through, more of God to unfold in time and space.  And in this teaching, among others, we get to do that with faith that a world that works for everyone is possible. I invite you to tour our past and see how it informs the future.  The Daily Guides offer quite the tour, and the archives search engine is an excellent docent.

Founder’s Church of Religious Science – A Center for Spiritual Living