Sharers of the Light

Sharers of the Light
How Adela Rogers St. Johns and Elaine St. Johns Shined the Light of Science of Mind
By Jeannette Quinn Bisbee

Do you know the names of these two women? One was the most famous female journalist in the early 20th century; the other once had three bestsellers on the New York Times bestseller list during the same time. Both of them were ordained as Religious Science ministers…but many people may never have heard of them and known of their deep connection to Ernest Holmes and Science of Mind.

I was just nine years old when I first saw Adela Rogers St. Johns on the Mike Douglas Show on TV. At that time, Adela was 73 years old, and I have never forgotten her. I don’t remember much TV from my childhood, but her interviews on that show were fascinating as she shared stories of all the famous in Hollywood from Rudolph Valentino to Carole Lombard, Clark Gable, and Joan Crawford. Adela made all of those actors from past years come alive in my mind’s eye; she was an amazing storyteller. Her grandson, George St. Johns, called his grandmother “bold and brassy” and said that Adela used to say, “I’ve never told a lie in my life, but I embroidered the truth if it made a better story!” Adela was a journalist famed for her coverage of the Bruno Hauptmann trial—the man convicted of kidnapping and murdering Charles Lindbergh’s baby in the 1930’s. She was also a novelist, a prolific magazine-story writer, and a screenplay writer. She got to know many of the Hollywood greats when she became the “Sob Sister to the Stars” or “Mother Confessor to Hollywood.” She wrote for Photoplay magazine, Cosmopolitan magazine, and Guideposts magazine—the inspirational publication begun by Norman Vincent Peale. She was awarded the Presidential Medal of Freedom in 1970. 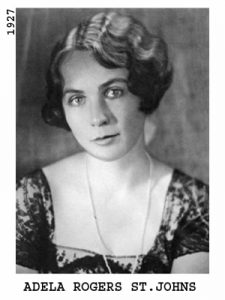 One of Adela’s best friends was Hazel Holmes, Ernest Holmes’ beloved wife. After Ernest and Hazel moved out of their property “The Palms” or “The Hill,” where the Holmes had resided from 1927-1945, Hazel and Ernest sold the property to Adela Rogers St. Johns. It was like keeping it in the family. The extended St. Johns clan had been part of Hazel and Ernest’s lives for many years. George St. Johns has his baptism certificate signed by Ernest Holmes, who performed the ceremony, and he has many happy memories of his time visiting Ernest and Hazel and growing up at on “The Hill.”
“Certain things that I have memories of I can’t tell you if I actually remember them, or if they are just such a part of family lore that they have become memories to me. I do remember Hazel Holmes reading to me. And I remember a certain wedding out on the lawn at ‘The Hill.’I remember the people, the hose, and Ernest smiling at me. But, do I remember the whole incident where a little boy full of mischief and energy turned the hose on the bride and groom just as Ernest pronounced them ‘man and wife’? Do I remember Ernest coming over and turning off the valve of the hose? Do I remember Ernest saying, ‘Well that was efficient—a marriage and a baptism all at the same time!’? I’m not sure if I do it has become so much of our family history and family memory…But, I know that growing up on ‘The Hill’ and knowing and being around Ernest and Hazel Holmes was all part of the amazing childhood I had….”
There were a lot of spiritual ups and downs in Adela Rogers St. John’s life as she dealt with the dissolution of her three marriages, her triumph over alcoholism, and most tragically of all—the loss of her beloved eldest son during World War II when his plane crashed after a successful bombing run. But her friendship with Hazel, her connection to Ernest, and her love of the Science of Mind teachings helped keep her centered and grounded in her faith in God. She said in an interview with her daughter, Elaine, for the April, 1987 Science of Mind magazine issue the following about her long event-filled life:

“There have been a lot of years since then [Bill’s death], a lot of eventful, joyful living. And there’s been difficulty, too. But I’ve had that rope. I know now that it’s woven of thousands of strands, threads of study, meditation, of faith achieved through every small victory, of moments of actual awareness of the omnipresence of God, and of the bright, strong threads of treatment as I learned it from Ernest. And for which I am grateful every day of my life.” 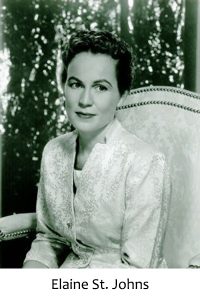 Adela’s daughter, Elaine, had an equally deep connection to Science of Mind and Ernest Holmes. If you want to read the best magazine article ever written about Ernest Holmes, then you need look no further than the December, 1987 article she wrote in Science of Mind magazine about the series of final interviews Ernest Holmes gave to her about his life. It is an intimate portrait of Ernest given to a woman who Ernest had known since she was eight years old. She had lived with Ernest and Hazel in their home with her children for a few months during World War II. During the interviews, Ernest shared some memories of his childhood, his father, his mother, and his brothers. But one of the main focuses of those last interviews with Elaine St. Johns was his worry that followers of Religious Science would get lost in their understanding of the Love and its relationship with the Law.

“There is a possibility,” he said, “of losing the Presence in the practice of the Principle. In the metaphysical field where they practice the Principle without the Presence, something freezes up….We’re talking about Law and Principle to such an extent that we may make the greatest principle into a mathematical formula, and it isn’t….If the purity of Truth is kept, then the future is secure. We have been working for years with Law. But the Truth is that without Love, Law is incomplete, for the two are one. This can be proven, for failure to recognize it will result in poor healing work….”

Elaine was a ghostwriter, and she wrote many bestselling books, but stayed in the background. She openly collaborated with her mother, Adela, on five best-selling books. She, too, was a frequent contributor to both Science of Mind magazine and Guideposts magazine. George St. Johns, her son, has very fond memories of escorting both his mother and grandmother throughout the 1970s and 1980s to many, many Religious Science Centers and hearing them speak to congregations all around California.

Elaine St. Johns also was the coauthor of the oft-reprinted book on an experimental program at the University of Redlands in proving the efficacy of prayer called Prayer Can Change Your Life. Over the course of a year, three groups of people were divided evenly into groups of fifteen. One group sought to improve their lives using the assistance of psychology, one through petitionary prayer, and one through affirmative prayer and spiritual insight and group guidance. The group that practiced the affirmative prayer had a 72 percent improvement in symptoms as shown by scientific testing and their own testimony—better than either of the other two groups. Here is a quote about prayer from that book. Here one of the participants in the study is explaining what was blocking her in her prayer work: 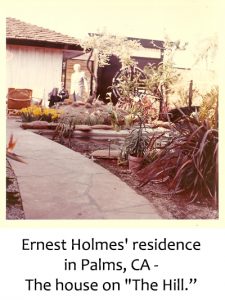 “It was the single word ‘immediately’ that helped me,” Mrs. R. said. “I decided that, when I asked for a better family relationship, it must be ‘immediately’ so, even if I could not see it for the moment. As long as I worried, fretted, kept looking for signs, I in truth hadn’t accepted the new situation. I denied my own affirmation and God’s power. So I decided to let it go—let it grow—and give it time to manifest before me. And to give thanks that it was so. I would be happy about it. Go my way rejoicing, so to speak…And, finally, that was the key for me….”

So, these two brilliant women—the one “bold and brassy,” her daughter “intuitive and scholarly”—have helped illuminate this teaching and philosophy for others throughout the years.

Click on the links below to read the Science of Mind magazine articles that are referenced: