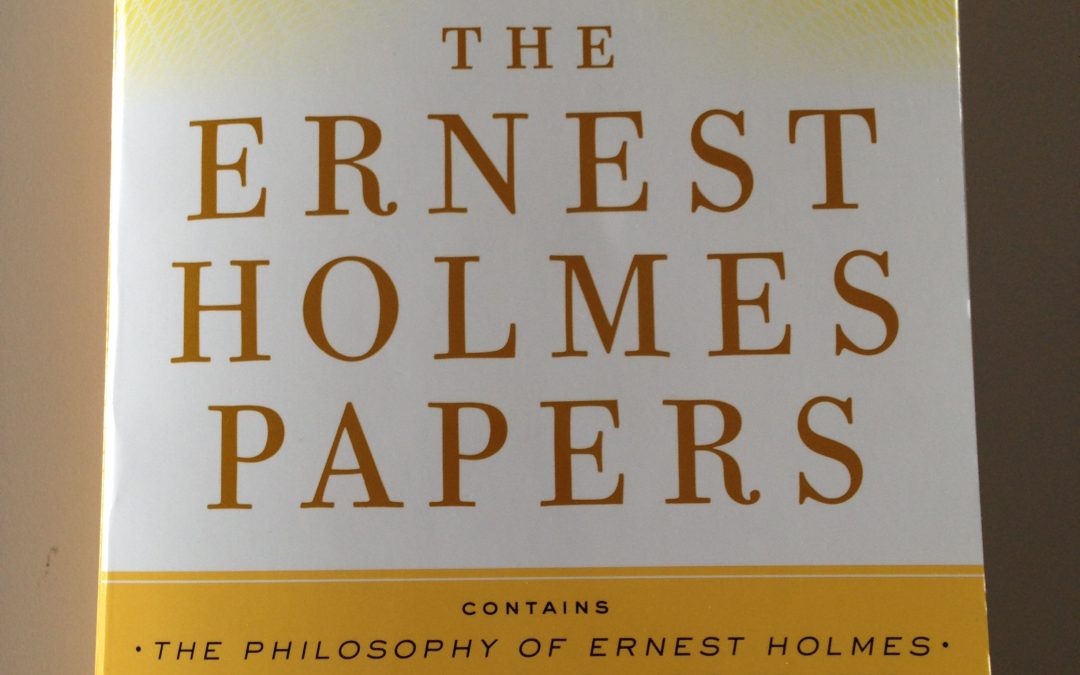 The Ernest Holmes Papers – New Anthology of all 3 volumes published this week!
By Dorianne Cotter-Lockard, RScP
Science of Mind Archives & Library Foundation Board President
During the past few years, we have received numerous requests from students and teachers of the Science of Mind for The Philosophy of Ernest Holmes: Holmes Papers Volume 1 because it was out of print.  We have good news – the SOM Archives and Library Foundation received the copyrights for all three volumes of the Holmes Papers from George Bendall’s estate, and we have partnered with Tarcher-Penguin to publish Kindle and print versions of The Ernest Holmes Papers, an anthology of all three volumes.  The other two volumes included in the anthology are The Anatomy of Healing Prayer and Ideas of Power, and Rev. Dr. Kenn Gordon has written a beautiful new Forward for the book.
George P. Bendall was a close friend and associate of Dr. Ernest Holmes.  After Dr. Holmes’ wife Hazel passed away, Mr. Bendall lived in Dr. Holmes’ home.  Because of this close association, Bendall was privy to the internal life of Dr. Holmes in his later years.  Bendall revealed his understanding of Holmes’ inner life in the introductory sections of each volume of the original Holmes Papers, which are included in this anthology.
The material included in this anthology is derived from spontaneous, intimate talks delivered in private with close personal friends and associates during the last year or two of Dr. Holmes’ life.  Material also comes from the Tuesday Invitational Group at the Institute of Religious Science in Los Angeles, as well as with Holmes’ private practitioner’s class.  Also included, is a transcription of Holmes’ dedication of the Whittier Church of Religious Science on February 12, 1959, which included Holmes’ “cosmic consciousness” experience that is of special note to Science of Mind students.
As a practitioner student, I read The Anatomy of Healing Prayer.  In it, Holmes said, “You will discover that there is a feeling that goes with your word.  Now, I am not talking about an emotion, but a deep inward indefinable something that I don’t think anybody can give to anyone else. . . . You know it, you recognize it, you feel it – like a song in a crowded room.  That is the impartation of the language of the Invisible to Itself” (p. 187 in the anthology).
This quote sums up how I do prayer treatment.  I take my time in each of the five steps of treatment until I reach that deep feeling from the center of my being, as Spirit’s energy is flowing freely through me as I speak the words of the treatment.  Once I achieve that feeling in the Recognition step, I move on to Unification.  Once I reach a deep connection in Unification, I move into the third step of Affirmation, and so on.  When I have attained that state of feeling, I’m no longer “in my mind” and I no longer have an individual identity.  Sometimes I’ll get goose-bumps or tears will flow, though the tears are not related to any particular emotion.  Other times, I may feel lightness, peace, or power.  When prayer treatment moves into the realm of the Invisible imparting the Word to Itself, the Law brings about a demonstration.   The demonstration will be a shift in consciousness, which may also show up in the physical.  Whether or not the demonstration shows up in the physical realm, when there’s a shift in consciousness, a healing has taken place.
I encourage you to purchase this new anthology of The Ernest Holmes Papers, available in bookstores and on Amazon.com.