The Power of Positive Thinking

Increasingly, young people born in the late twentieth to twenty-first century in North America are not raised in a home where the family attends church, and those under forty may not recognize the name of Dr. Norman Vincent Peale. However, for many people around the world, he was the face of “positive Christianity.” His popular books and ministry helped reshape Christian churches—and that shift continues even today in the wildly successful Christian ministries of people like Joel Osteen. Many of us in Religious Science forget how enormously the ideas that we embrace have impacted the landscape of religion. Dr. Norman Vincent Peale was one of the spiritual revolutionaries who acted as an agent of change. He regarded Ernest Holmes as a spiritual mentor.

Dr. Peale was introduced to Ernest Holmes in 1920 when he was just a young man on his first job. When Peale was a teenager, he was confused about his career choices and calling. He felt a deep desire to follow in the footsteps of his father, a Methodist minister, but he felt too shy and insecure to imagine himself in front of a crowd of churchgoers leading a congregation. Instead, Dr. Peale fell back to a secondary choice and leaped into the world of journalism.

His first boss, Grove Patterson, editor of the Detroit Journal, assigned Peale the job of writing obituaries. After a few months, Patterson took young Peale aside and talked to him about the personal problems that were holding him back from being a top-rate reporter. In an interview with Helen Munger, June 1962 Science of Mind magazine, Peale explains:

“Grove Patterson was both personal friend of Ernest Holmes and a student of Science of Mind. He got everything Holmes wrote on Science of Mind and practiced what he learned….Well, one day Grove took me aside and handed me a copy of one of Ernest Holmes’ early books. ‘Now I want you to read this and study it,’ he told me, and explained, ‘I know this man Holmes and I’ve learned a lot from him and you will too. One particular thing I learned is this, Norman, and I want to pass it on to you: Never be afraid of anybody, anything, or any situation. Don’t be afraid of people. Most people are afraid of somebody or some situation. If you’re afraid, you are thinking almost entirely of yourself. Stop thinking of self,’ my editor warned….Well, this conversation and Dr. Holmes’ book influenced my entire viewpoint of life.”

Norman Vincent Peale began to study and apply Ernest Holmes’ ideas. Even Peale did not know just how much of an impact they’d had upon him until he was called out late one night to cover a fire in a six-story building. A large crowd was gathered to anxiously witness the spectacle of a preteen girl desperately trying to get up her nerve to cross a narrow plank from the burning building to the next-door building, which was eight feet away. She was paralyzed with fear, and the crowd was trying to urge her to cross before it was too late. Suddenly, Norman Vincent Peale found his voice. He asked the girl if she believed in God, if she believed that God was up there with her, if she believed that God would protect her. Hearing his words and encouragement, she started across the plank. When she faltered, Peale called up, “Don’t stop, honey. God is helping you. Keep straight ahead.” She made it to safety, and a policeman in the crowd asked if Peale was a preacher. Peale denied it, but later, when he was alone, he realized that when he had finally forgotten about his own fears and worries—he had found his voice. He was ready to follow his true calling into the ministry. 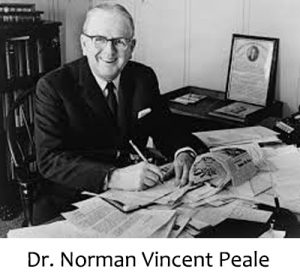 Thirty years later, Dr. Norman Vincent Peale would write his massive bestseller, The Power of Positive Thinking; it would stay on bestseller lists for 186 weeks and sold over 5 million copies. It was truly the first self-help bestseller, and combined many concepts of psychology and religion. Many of the ideas presented sound like they could have been plucked from the pages of The Science of Mind.

For example, who wrote the following: Ernest Holmes or Norman Vincent Peale?

“A sure cure for lack of confidence is the thought that God is actually with you and helping you. This is one of the simplest teachings in religion, namely, that Almighty God will see you through. No other idea is so powerful in developing self-confidence as this simple belief when practiced. To practice is simply to affirm, ‘God is with me. God is helping me. God is guiding me.’ Spend several minutes each day visualizing His presence. Then practice believing that affirmation. Go about your business on the assumption that what you have affirmed and visualized is true. Affirm it, visualize it, believe it, and it will actualize itself….”

Dr. Norman Vincent Peale wrote this when he was the very successful Christian minister of the largest Dutch Reformed Church in the United States. Doesn’t it sound like the same ideas that Ernest Holmes had been sharing with readers and followers since 1915 when he began writing articles for Uplift magazine?

In 1940, after corresponding for years, Ernest Holmes and Norman Vincent Peale meet each other in person. Peale was in California as the technical advisor of the Hollywood movie, One Foot in Heaven, about a small-town minister. The two men hit it off, and their friendship deepened.

“Whenever I reread things that Ernest said, I always have the feeling he still lives, a warm personal friend. He loved everybody. He gave of himself. I found he talked of religion differently from the orthodox way. One of the troubles I find with religion today is that it has hard, fast, old forms in which it has become encrusted. What needs to be done, I feel, is to break the form and start loving….Holmes certainly taught people to love good.”

Norman Vincent Peale’s writings sound familiar, soothing, sane, and gentle—a Christian viewpoint that we most of us can totally identify with. How surprising it was to find in researching this article that many conservative Christians urged people to stop subscribing to Guideposts, the inspirational magazine that Norman Vincent Peale started with his wife in 1945. They claimed that visualizing as an aid to healing was a practice that left one open to demon influences. One forgets that Science of Mind and even Norman Vincent Peale were, and are still, far ahead of many conservative thinkers…but the tide is shifting as affirmative prayer and ideas of unity reshape modern churches. 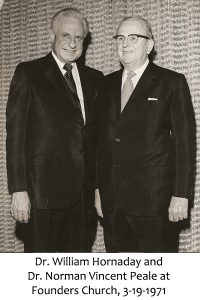 Dr. Norman Vincent Peale explains how he reshaped modern Christianity with his writings and magazine. He said, “The purpose of writing inspirational notes is simply to build others up because there are too many people in the demolition business.” Ernest Holmes and Norman Vincent Peale—powerful thinkers, whose writings continue to bring love and positivity to a world still starving for these ideas!

Please click on the link below to download the entire June 1962 Science of Mind magazine as a PDF file, free of charge:

Please click on the link below to download the entire June 1987 Science of Mind magazine as a PDF file, free of charge: