I like to wander through the Science of Mind Archives resources—the ones that are available via the Internet.  Each time I do that, I end up going on a journey of expanded wisdom and understanding. I invite you with me on that journey.  This week I “discovered” the other Ralph Waldo who also influenced and shaped Ernest Holmes’ thinking and writing. His name was Ralph Waldo Trine, and his best-selling classic, In Tune with the Infinite, published in 1897, sold 2 million copies. He was read and loved by people as diverse as Queen Victoria, empress of the British Empire, to Janet Gaynor, the first winner of an Academy-Award for Best Actress.

From In Tune with the Infinite:

“We are born into a strange time—a time that tries men’s souls. Bewilderment and fear hold many; change and uncertainty stalk through the land—all lands. Those who keep their courage up and go serenely on are coming through in a way that those who weaken or lie down cannot know. But to do this many lives need help—real concrete help….There is something in the universe that responds to intrepid thinking. The POWER that holds and that moves the stars in their courses sustains, illumines, and fights for the brave and the upright. Courage has power and magic in it. Faith and hope and courage are great producers—we cannot fail if we live always in the brave and cheerful attitude of mind and heart. He alone fails who gives up and lies down. To open ourselves to this sustaining POWER, to live continually under its guidance, this is our part. Those of us who do our part will keep free from fear, and therefore from a weakening, corroding worry.…” (1897)

It was interesting to read this book, and then to read the reviews on Amazon—where it is still being widely sold. (However, it is available for a free download here at the Archives. Follow the link below to download it.) Many readers spoke passionately of needing to replace “their dog-eared copy.” Others comment on the book’s lasting power: “This has been my go-to book for a while now. I keep it with me and just randomly read pages. I let it guide me.” Clearly, In Tune with the Infinite is regarded as a spiritual classic that still speaks to the heart of human concerns.
Ralph Waldo Trine was born in 1866 in Mount Morris, Illinois. He received a degree from Knox College and later studied history and political science at the University of Wisconsin and John Hopkins University. He was a special correspondent for the Boston Daily Evening Transcript. It is believed that during this time in Boston,Trine studied the Transcendentalist, who also influenced Ernest Holmes. Later, Trine lived in Mt. Airy, New York, where he became involved in metaphysical seminars at Oscawana. Perhaps it was this involvement that led to Trine’s interest in Eastern religions. In my research, I discovered a photograph of Ralph Waldo Trine with Swami Abehedananda in the year 1900. This famous Indian swami and teacher had been charged with taking Hinduism’s guiding principles out into the larger world. Ralph Waldo Trine is standing right beside him in this grainy, almost-forgotten photo taken in the little town of Eliot, Maine (image above). 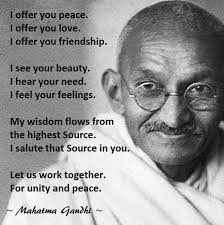 This Indian influence was not only received by Ralph Waldo Trine, but Trine’s writings and ideas were also received by another world famous Indian leader—the famous Mahatma Gandhi, political visionary and non-violent leader of India. Gandhi loved Trine’s concept that the true seeker of spiritual power can become so filled with Divine power that the force of it will reach the uttermost parts of the world. It was a power that Gandhi was to call upon in the revolution that threw off the British Empire’s control. Also, Gandhi  embraced Trine’s terms “soul power” or ”soul force” — the term Gandhi translated from English into the Indian term satyagraha. “Satyagraha” is most often translated today by the term non-violence, but there was already in use in India the term ahimsa — a meaning ”non” and himsa meaning “violence.”  “Gandhi wanted another term that was more active, and he took from Trine the term ‘soul force.’ Another theme which Trine stressed and which Gandhi constantly used in his efforts to build bridges between Hindu and Muslim in India was that there was a common core to all religions.”(From Gandhi: A Political and Spiritual Life by Rene Wadlow.)
The influence can be seen in one of Trine’s most famous quotes:
“There is a golden thread that runs through every religion in the world. There is a golden thread that runs through the lives and the teachings of all the prophets, seers, sages, and saviours in the world’s history, through the lives of all men and women of truly great and lasting power….The great central fact of the universe is that the spirit of infinite life and power is back of all, manifests itself in and through all. This spirit of infinite life and power that is back of all is what I call God. I care not what term you may use, be it Kindly Light, Providence, the Over-Soul, Omnipotence or whatever term may be most convenient, so long as we are agreed in regard to the great central fact itself.”
We hear so much of Ancient Wisdom influencing New Thought, about how New Thought is a compilation of spiritual ideas from all cultures—it is wondrous to see that New Thought is and has been influencing the world and uniting and freeing minds wherever its influence is felt!
Ralph Waldo Trine wrote numerous books; he was still active well into the 1970s. He retired with his wife from the Hudson Valley area to Claremont, California, where they resided at a retirement home for religious professionals called Plymouth Place. He lived out his days peacefully planting and tending fruit trees, and died peacefully at the age of 91. He is not well known—even in the world of New Thought—but his ideas and writings have inspired the famous and revolutionized the world you live in. Trine and Ernest Holmes sound like brothers in their uplifting writings and inspiration!
“Again there are many who are living far below their possibilities because they are continually handing over their individualities to others. Do you want to be a power in the world? Then be yourself.”~~Ralph Waldo Trine
Click on the link below to download In Tune with the Infinite:
http://www.scienceofmindarchives.org/component/k2/item/845-in-tune-with-the-infinite