“I was fortunate to know Ernest Holmes’ practitioner, Vetura Papke. She was my teacher and my practitioner. The first time I made an appointment to see Vetura for spiritual guidance; she sat behind a desk in all her 80-some years of glory. She was as sweet looking as the kindest grandmother and she always smelled like flowers. As I began to lay out my woes, I noticed that she was mumbling something. I continued telling my story and the mumbling got worse. It was as if she wasn’t even paying attention to me at all. Finally, I stopped and pointed out to her that I had waited a long time for this appointment and it didn’t feel like I was getting her attention. She said, ever so sweetly, “Oh no dear, I hear you.” “Then what is it that are you so adamantly mumbling,” I asked. I’ll never forget her answer. She said, “Not a word of truth in it. Not a word of truth in it.” 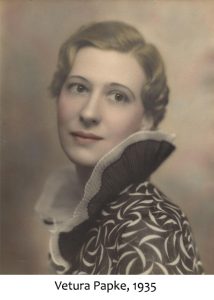 Vetura Papke so believed in treatment that she didn’t want to ‘know the story’, and it was that absolute faith in each person’s Perfection and Oneness that made her such a powerful teacher, practitioner, and spiritual guide for so many.  Vetura Papke was born in 1901 in Kansas City, Missouri.  She was born into a well-to-do family that deeply supported the Baptist Church. Vetura was always somewhat of a spiritual rebel and at the very young age of 13, she refused to attend the Baptist Church anymore.  Reluctantly, after a family fight she stayed in the church until she was 18, but as soon as she reached adult age she quit.  Vetura said, “They wanted me to believe that I was a sinner, and I could never believe that.”  Her life of luxury came to abrupt end when her beloved father died; her mother and Vetura had to leave the family mansion and reside in a one-bedroom apartment. Vetura’s life bounced around for few years: a brief time as a 5th grade teacher, college, expelled from college for violating curfew, successfully selling handkerchiefs at the local department store, and, finally, meeting and marrying her beloved first husband.
Her first marriage was one of the greatest tests of her life.  They planned their wedding, but her soon-to-be husband was offered a job.  His new employer offered to pay for the entire wedding if the young couple would move the wedding date up by three months, so her husband could move and begin employment with the company sooner. The young couple was thrilled by the offer of a free wedding; they were married, and moved to take the new job.  On the exact day of Vetura’s original wedding date—her young husband was killed in an accident after just three brief months of marriage.  Heartbroken, Vetura said she remained mad at God for 15 years.
Work life had to flow on for Vetura, so she went away to a prestigious beauty school in New York City in 1922.  After graduation from the school and working successfully in salons, she heard that Clairol, a beauty products company, was looking for someone to travel around the U.S. and teach about their new “Miss Clairol” line of products.  Vetura, always willing to take a risk, showed up to the job interview in an evening gown with long white gloves on and proclaimed, “Clairol Home Hair Color is so easy to use, you can apply it in an evening gown, and go out later.”  Vetura had the job! She went around to locations across the country demonstrating the home hair color product—always dressed in an evening gown.  But she did trade her ‘white’ gloves for black gloves for the demonstrations—even with her faith the white gloves showed the dye too much….
Vetura Papke came to California in 1937.  By that time, she had mended her feud with God, and she had progressed from being a Baptist, to Catholicism where she discovered her love of ritual and confession, and then had moved on to being a teacher with the Unity Church.  Vetura said, “The Baptist Church taught me that God loves me, the Catholic Church taught me how to pray, confess, and forgive myself.” Then she embraced the teachings of Unity and taught that for many years; finally she came to Religious Science when two people told her that she really belonged more in Science of Mind.  Frustrated by their comments, Vetura was determined to prove them wrong; she investigated more, took a class—and she realized that she had finally found the teaching and knowledge she had been seeking all of her life.  She was licensed as a Religious Science practitioner in 1958; she had an office for 20+ years at the Institute of Religious Science; for eight years she was the Director of Practitioner Training at the Institute; she graduated as a minister in 1965, but she chose not to be ordained until 1989, so that she could focus on her work as a practitioner; she continued working with clients until shortly before her death—even at age 94 she was still so sought after as a practitioner—clients would wait up to two weeks to have an appointment with her.  But if you had a crisis and needed her desperately, she would drop everything to work with you.  On March 19, 1997 Vetura Papke made her transition.  Thousands of people around the country still remember her fondly.
Cathy Sue Sagerser was one of two people I interviewed for this blog, and she remembers Vetura opening up each of their practitioner classes with the same affirmation.  To this day, Cathy can still ‘chant it’ from memory it is so deeply embedded in her consciousness:
“I am an irresistible magnet, with the power to attract unto myself everything that I divinely desire, according to the thoughts, feelings and mental pictures I constantly entertain and radiate.  I am the center of my Universe.  I have the power to create whatever I mentally choose and accept.  I begin choosing and mentally accepting the highest and best in life.  I now choose lavish abundance for myself and for all mankind.  This is a rich friendly Universe and I accept its riches and hospitality now!!!” 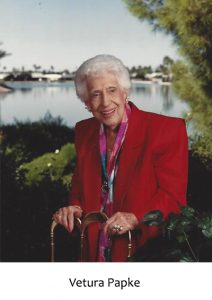 Everyone that I spoke with wanted to share the anecdote of Vetura’s ‘money tree’.  A wonderful little book was written about Vetura Papke, called Angel in Residence, written by Elizabeth Neuwirth in 1995.  In that book Vetura relates about a time when money was in short supply.  Her second husband, Carl, had lost his job; the bills were piling up and their savings account was disappearing.  She had read a book on visualization, and Vetura knew she had to embody her consciousness of prosperity.  She got out a bucket, went into the garden, and began picking up the ‘paper money’ she saw all around her in the yard.  She took the bucket of ‘money’ into the house, and dumped it into the tub in the guest bedroom; she returned to the yard and picked up more ‘money’, back into the house to fill the tub—until it was full of ‘money’.  Then, she sat down at the table and began sorting all the ‘money’ into stacks of $1, $5, $10, $20, and $100 stacks. She then made out deposit slips for each of the stacks.  The deposit slips were made out in the name, “V.P. & G.”, which stood for Vetura Papke and God!  She hid the deposit slips under her blotter.  By the end of the week, checks began arriving in the mail.  Some were gifts, some were overdue payments, and one was an enormous check from a client that Vetura had treated many years ago.  The client had been in desperate financial straits; Vetura had treated for her prosperity.  This woman’s life had turned around; she stopped for a brief visit and she handed Vetura a ‘Thank You’ card—enclosed was a check for $3000!!
“Treat and move your feet” was a favorite aphorism of Vetura’s; she wanted students to take some symbolic action or real action that would show that they were employed by God in demonstrating the Good that was the foundation of their daily life.  This money tree exercise was a favorite of hers and her many students.
I was supported in preparing this blog by the assistance of Barbara Lepori Lundburg, who was blessed to have received from Vetura’s caretaker and student, Barbara Blansit, all of Vetura’s library and many of her cherished possessions.  Barbara has established a Facebook page called, “Vetura Papke”; on that page she shares many of Vetura’s unpublished writings, photos, anecdotes, and life history of Vetura.  If you love Vetura Papke this Facebook page is a wonderful resource.  The page has only been around since March 22, 2014, and already 127 ‘Friends’ have found this wonderful resource.
Each year at the annual Centers for Spiritual Living Convention, the award for Outstanding Teacher is given out; it is named after Vetura Papke.  There was some thought that maybe the names of the annual awards should be dropped as few people remember who they are named after.  Hopefully, this blog will remind all lovers of Religious Science the reason the Outstanding Teacher Award is named for Vetura Papke.
(If you would like to read more ideas and teachings directly from Vetura, then please follow these links from two articles in Science of Mind magazine where Vetura speaks about the power of scientific prayer.)
http://scienceofmindarchives.org/som-magazine/item/464-april-1988
http://scienceofmindarchives.org/som-magazine/item/538-june-1994