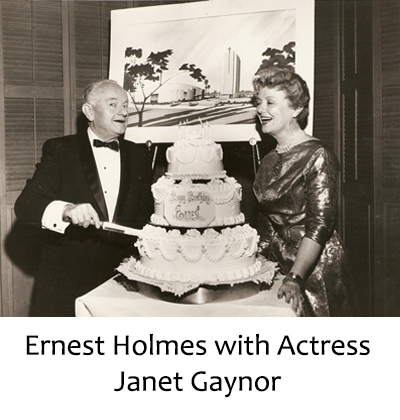 Ernest Holmes lives on in my mind’s eye as the vital, vibrant, jolly, warm-hearted, intense, charismatic presence that touched so many lives from his first moments on the planet in January 21 of 1887 to the moment of his passing from this realm in April of 1960. I was only two when he transitioned in 1960, but Ernest Holmes has felt like a personal friend since I made his acquaintance through the pages of a book in 2007.

I can so remember the moment when I got the depth of what Ernest Holmes was trying to communicate through out all of his speeches, articles, books, sermons, and radio talks. It was when I read The Art of Life published in 1948.

“We can imagine a fish being told that he is surrounded by water but not quite realizing what that means. We can imagine such a fish swimming north, south, east and west in search of water….Perhaps some wise old fish might say, ‘It has come down to us through tradition that in ancient times our ancestors knew about a wonderful ocean of life. They prophesized a day when all shall live in the Waters of Life happily forever.’ And can’t we imagine all the other fish getting together, rolling their eyes, wiggling their tails, looking wise and mysterious and beginning to chant, ‘O water, water, water we beseech you to reveal yourself to us; we beseech you to flow around us and through us, even as you did in the days of our revered ancestors.’

As a matter of fact, we are in the Water of Infinite Life as the fish is in the ocean…..”

That is where Ernest Holmes swims for me…in the Water of Infinite Life.

Ernest Holmes, unlike many of his followers, did not belief in reincarnation. He didn’t impose his beliefs about life beyond this veil on any of his followers, and he believed that if believing in future human existences assisted anyone in their spiritual growth—he was all for it. Ernest personally believed, however, that all that is the essence of us individually moves on to another dimension where we rejoin the souls closest to us and continue our work. With a twinkle in his eye he commented to practitioner, Frieda Grinton, from the Institute of Religious Science, “I’ll tell you this much—they’ve gotten the last pair of diapers on me that they are ever going to get!”

In the little pamphlet, Gateway to Tomorrow, (which is available for download for a small fee from the Science of Mind Archives and Library) Ernest Holmes discusses his feelings about immortality and what happens on the other side.

“Jesus said, ‘In my father’s house are many mansions: if it were not so, I would have told you.’ In other words, there are different planes of existence and we progress from one to the other, always more and never less ourselves. We can see how this principle works right here in this world. There is a certain form of intelligence even in a piece of steel. There is an atomic intelligence in every physical object. And we see another level of gradation of this intelligence in the animal life. Then it broadens out and reaches the human being….Everything that Jesus did was done as an object lesson to teach us the relationship we have to this world, to each other, to the next world, and to God. He taught us that there is no long period between sleeping to this world and waking to the next….There is no doubt that Jesus had enough spiritual power at his command to resist any violence had he so wished. In order to teach the lesson he wanted us all to learn, it was necessary that he permit himself to be crucified, that his body be placed in a tomb, and that he become resurrected and appear as he did to hundreds of people who knew him personally so that there would no longer be any doubt in their minds….Thus, I believe the possibility of [immortality] rests on just one simple proposition: There is One Life that Life is God, and that Life is every man’s life….”

Ernest Holmes had a deep interest in any and everything that proved that life continued on beyond this human plane. Both his close friend, Augusta Rundel, and his wife, Hazel Holmes, were known to have highly developed intuitive and psychic abilities; he was friends with the famous medium, Eileen Garrett, and he followed J.B. Rhine’s 20+ years of research on psychic abilities at Duke University that sought to document and assess people for extrasensory perception and other psychic skills. Ernest’s mind, as always, was ‘open at the top’. He felt that there was worth in psychic abilities and the evidence they provided of life beyond this plane, but he felt they were unreliable at the best of times and open to charlatans taking advantage and even making disturbing profits from untested and unreliable psychic abilities foisted on people in vulnerable situations. By the early 1930’s he was disheartened to know that some of his own Science of Mind practitioners were combining practitioner sessions with psychic readings. This is why there are some chapters on psychic powers in the 1926 Science of Mind text, but they were removed permanently from the revised edition in 1938—the only edition he embraced from then on.

One of Ernest Holmes’ closest friends was the man he personally picked out to be his successor, Reverend William Hornaday.  In the eulogy that Rev. Hornaday delivered at Ernest Holmes funeral.  Hornaday says:

“After the dedication of Founder’s Church on January 3rd, Dr. Holmes never missed coming to the church at noon to pray and meditate. He would sit in the third row in the right center section and treat for the future of the work he loved and to which he devoted his life. Now Ernest has gone on before us, but the symbol of love remains. The beautiful edifice he built remains. His teaching remains, the affiliated churches remain—we remain. His passing hands the torch to each of us, whether we are minister, practitioner, member or friend….We do not know why the swallows return to San Juan Capistrano each year. We do not know what brings the salmon back from thousands of miles at sea to the identical place of their birth. We do not know what takes the geese southward, what causes them to rise from the marshlands as one—except an inner voice that speaks declaring, ‘It’s time to fly’. Ernest Holmes listened patiently for the words, ‘It’s time to fly’, and while sleeping peaceably he heard the call….”

So, although Ernest Holmes flew this earthly realm when I was but a little girl unaware of the teachings of Science of Mind, Ernest has been a teacher to me, a mentor, a guide, and, most importantly, a friend—in some of those dark nights that humans encounter along our heartfelt path. So, please celebrate with me the birthday of Ernest Holmes and the promise that his words will guide others long into the future!