Are You Ready To Be ‘Wowed’ In Florida? 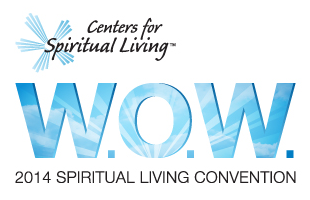 WONDER is the theme of the 2014 Centers for Spiritual Living Convention in Orlando, Florida beginning on Sunday, February 16th and ending on Friday, February 21st. This year’s convention is, as usual, filled with wonderful speakers, experiences, gatherings, and insight. The business side of the convention is not too complicated—only 4 new amendments are up for voting, and none of them seem too earth-shaking. So CSL Ministers, Practitioners, and Laity gathering to attend the Convention should be able to soak up sun and fun during the midst of a winter that has had much of the U.S. and Canada held in the midst of a “polar vortex” that has brought a frigid winter to souls near and far.

The keynote speaker is the fabulous Jean Houston, Ph.D.; she has been involved for the last 45 years in expanding consciousness and transformation on a global level. From her days as a high school student working with First Lady Eleanor Roosevelt to further the work of the United Nations to her current establishment and sharing of the Social Artistry Movement around the world. What is Social Artistry?

“It is a new profession whose craft could be said to be that of conscious evolution. We are living in the time of a choice point for an acceleration of the evolutionary or devolutionary process. As either the neurons or the cancer of the planet, we are now conscious of the tremendous responsibility that is ours: the capacity to direct enhancement or the destruction of ourselves, the earth, and all its creatures and forms. This new profession addresses the training of people who agree to this challenge and who have the maturity, initiative, and vision as well as a passion for making a difference….”{Jean Houston website}

A Social Artist is a healer of people, societies, and, thus, the whole planet. Jean Houston’s Keynote Address is entitled, “Spirituality in Changing Times: An Unprecedented Hero’s Journey”; her talk will be on the last night following the Convention Banquet.

Another Featured Presenter is film-maker and coaching guru, Austin Vickers. His recent film People versus The State of Illusion has been featured on PBS stations around the U.S. It was a film inspired by an insight he had when he was touring Alcatraz many years ago. A former Alcatraz inmate led the tour of the historic site, and he told the tour participants that one of the strangest things about prisoners doing time on “The Rock” was, that even though it was depressing, inhumane, and demoralizing—so many released prisoners would reoffend only to return in less than a year. Austin Vickers had the insight that the prison metaphor is what people do mentally and spiritually—no matter what changes they make in their personal lives—they tend to shift right back to their old mental prison. His movie features insights and commentary by scientists, authors, and educators like: Debbie Ford, Dr. Candace Pert, Dr. Joe Dispenza, Dr. Peter Senge, and Dr. Michael Vandermark. His presentation at the Convention on Wednesday night in the Disney Premier Theater will feature “The Science and Power of Imagination”—an interactive media experience that will help viewers to see a new perspective and process for handling the challenges of daily life.

There are many workshops and general sessions being headlined by Ministers and Practitioners from CSL Centers from around the world on many topics of interest. Some ones to watch for are:

Visitors will get to play and explore Orlando from the beautiful Disney Coronado Springs Resort—featuring a 5-story Mayan pyramid that towers over the beautiful pool area. Flavors of Mexico and regional cooking are featured in a number of the resort’s restaurants. And, of course, participants are sure to sneak away to take some time to explore Disney World! It promises to be a Convention filled with fun, relaxation, good food, entertainment, meeting and making new friends, and learning more and more about Centers for Spiritual Living and Science of Mind. What more can you say but, “WOW!”

And where will the Science of Mind Archives be? Of course, right there in the midst of it all that “Wowness!” The SOM Archives is a Bronze Level Sponsor with a display table. We will have all four Volumes of the Extension Study Course in the Science of Mind, Live Again CD’s, all volumes, Chronicles of Religious Science: Volume I, and the wonderful Ernest Holmes biography, In His Company. If you are going to be at Orlando for the convention, we are still looking for volunteers to assist in manning the table through all 5 days of the Convention. One way or the other, please stop by our table and register for an opportunity to sign up for our book raffle. We value each and every one of you that have assisted us in supporting our work of preserving the rich history of Science of Mind, New Thought, Religious Science, and Ernest Holmes. We couldn’t do it without you and all of your support…..

Ernest Holmes said, “This is the great mystery, the limitless wonder of the universe—that, which out of nothing can make something.” The WOW Convention of 2014 will share some of the Wonder of Science of Mind with all the many people who value its Principles; we know you will have a Wonderful Time! Wow!

If you would like to volunteer to join the Science of Mind Archives team in Orlando, please email James Abbott: info@somarchives.org